in 1993, the company is widely known for responsible lending practices, industry and consumer advocacy, market innovation and operational agility. Under George’s direction, CMG Financial has developed into a robust firm making its products and services available to the market nationally through three distinct origination channels including wholesale, correspondent and retail lending which also serves the home builder, real estate and credit union communities. CMG Financial offers a variety of home financing solutions including their proprietary products and programs, such as the All In One Home Loan™, which facilitates faster loan payoff, and HomeFundIt™, to enable buyers to raise their down payment.

In addition to his role at CMG Financial, George has served on the MBA’s Board of Directors since 2012, is a member of MBA’s Independent Mortgage Bankers Executive Council and MBA’s Consumer Affairs Advisory Council, as well as an active member of MBA’s advocacy efforts. George serves on the Board of Directors for MBA’s Opens Doors Foundation™. He is the immediate past Chairman of MBA’s Diversity and Inclusion Committee. Additionally, George is past Chairman for California Mortgage Bankers Association and has served on many advisory boards and task forces within the industry.

In 2012, George established the CMG Foundation, a philanthropic endeavor to support non-profit organizations at both the community and national levels. To date the CMG Foundation has provided valued funding for the Gary Sinise Foundation’s R.I.S.E. program, MBA’s Opens Doors Foundation™, Homes for Our Troops, and the Cancer Support Community SF Bay Area programs, as well as benefiting a host of other local organizations. 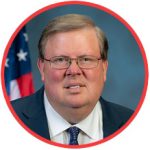 Brian D. Montgomery serves as the Acting Deputy Secretary for the U.S. Department of Housing and Urban Development (HUD). In this role, he manages the day-to-day operations of the agency and advises and assists the Secretary in leading the Department’s nearly 8,000 employees.

Mr. Montgomery also serves as the Assistant Secretary for Housing – Federal Housing Commissioner for HUD. Nominated by President Trump in September 2017, his confirmation marks the first time an individual has served as head of the Federal Housing Administration (FHA) twice, and under three different Administrations.

With over 30 years of experience in both the public and private sector, including his first term as Commissioner from 2005 to 2009, Mr. Montgomery brings to HUD a deep knowledge of housing issues and vast experience spearheading large-scale policy initiatives. He is known for his work in reforming the Real Estate Settlement Procedures Act, developing solutions to assist struggling homeowners during the financial crisis, and his leadership of FHA modernization efforts that led to legislation in 2008.

In addition to his first term as FHA Commissioner, Montgomery’s government experience includes serving as Deputy Assistant to President George W. Bush from 2001 to 2005, including serving as Secretary of the Cabinet from 2003 to 2005, and as a member of the Federal Housing Finance Board and the board of NeighborWorks America. While serving as Secretary to the Cabinet, Montgomery was appointed as the White House primary point of contact for the shuttle Columbia accident investigation in February 2003. For the effort, Montgomery was awarded the NASA Exceptional Service Medal in 2004.